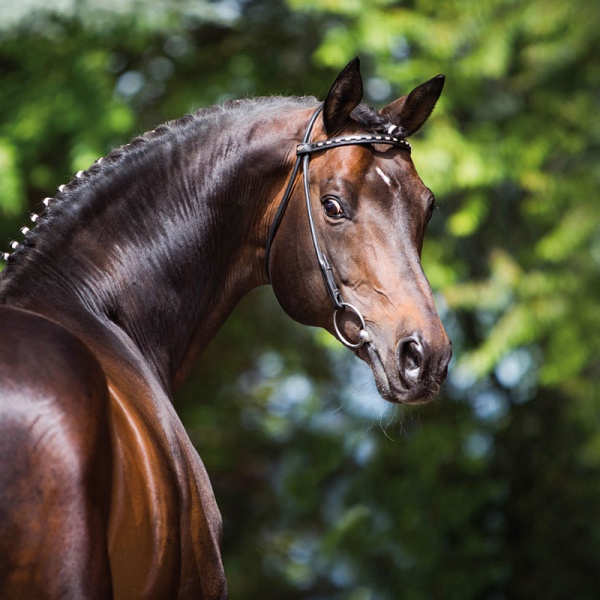 Even at his licensing E.H. Cadeau was very popular. He convinces with beauty and charm as well as significant parts of the body, which reveal the background of the highly esteemed maternal tribe. The strong foundation is equipped with good and big joints. Especially the trot impresses with unswerving tact and accentuated mechanics in expansive expiration.

In the pedigree of E.H. Cadeau you can find the champion stallions Kostolany, E.H. Bartholdy, Zhivago and E.H. Mackensen as well as the reserve champion Arogno and the best Trakehner type sire, E.H. Caprimond. Three state premium mares and the precious blood of Mahogany and the famous Maharajah are also found in the line of descent.

With Dorothee Schneider Cadeau was the series winner in riding horse tests as well as in A and L dressage. At the 2003 Trakehner national tournament the brown stallion became vice champion.

Cadeau was awarded the title Elite Stallion by the Trakehner Association in 2009 for his own performance and superior breeding qualities.

E. H. Cadeau is currently the father of 126 registered mares. Among them are 47 state premium mares, six reserve winners and seven champion mares as well as Kalla, the reigning national winning mare.
So far, five of his sons have been licensed. The winning stallion of the Trakehner stallion market 2014, Sir Zanzibar, also comes from an E.H. Cadeau mother.

Many other descendants have been successful in tournament sports.
Of the 219 registered sport horses ten have been successful in S dressage. Among them are the dressage horses Cote d’Azur, Occacio, Irdenkreis, High Pleasure and Kamani Hill. The latter two were among the best Trakehner dressage horses of 2019. Topmodel out of an E.H. Cadeau mother also ranks among them.

E.H. Cadeau gives his offspring type, a lot of body, a good size and a solid, well-articulated foundation. He also passes on very good basic gaits as well as high rideability and a very calm, balanced temperament.

In the pedigree of E.H. Cadeau you can find the champion stallions Kostolany, E.H. Bartholdy, Zhivago and E.H. Mackensen and Reserve Champion Arogno and Best Trakehner Type Sire, E.H. Caprimond. Also, three state premium mares and the precious blood of the Mahogany and the famous Maharajah are found in the descent.

With Dorothee Schneider, Cadeau was the series winner in riding horse tests as well as in A and L dressage. At the 2003 Trakehner national tournament the brown stallion became vice champion.

Cadeau was awarded the title Elite Stallion in 2009 by the Trakehner Association for its own performance and superior breeding qualities.

E.H. Cadeau is the father of the licensed stallions Occacio and Irdenkreis, both of which are successful in dressage up to the advanced level. Other licensed stallions are Midway and Montafon. At the South German licensing the stallion Seraphin by E.H. Cadeau out of Saphira by E.H. Lehndorff’s was licensed. He is the fifth licensed son of E.H. Cadeau’s.

By now, 126 registered mares originate from E.H. Cadeau. Among them are 47 state premium mares and seven champion mares. The national winning mare of 2014, Kalla, is also a daughter of the elite stallion.

In 2018, Imperia stood out in particular. She was best of the four-year-old mares in Marbach.

Many of E.H. Cadeau’s descendants are very successful in tournament sports. One example is Cote d’Azur, bred and owned by Margit Eisner. The mare won the TSF dressage horse championships under Helen Langehanenberg as well as various international dressage tests up to the most advanced class.

High Pleasure, bred by Hubertus Dieckert, is also internationally successful with his owner Anna Den and his rider Tobias Nabben.

In 2018, the eleven-year-old Descartes, bred by Tilman Pagel, and his rider Maren Benz have also established themselves in class S.

Kamani Hill, bred by Daniela Gierhardt, is successful in international dressage under his rider and owner Annika Bäumer. The gelding out of a Lehndorff’s dam was one of the most successful Trakehner dressage horses of 2019.

Ancelotti by E.H. Cadeau holds great prospects for the future. The stallion bred by Marika Werner and owned by Maximilian Camp is among the top five Trakehners in riding horse tests for three-year-olds.

E.H. Cadeau’s offspring is also successful in eventing. One example is Donnerstag. The mare out of an E.H. Sixtus mother was bred by Ute Gabriel and is in the possession of Dr. med. Jürgen Brüssau. She is successful with Brüssau’s daughter Emma up to CIC**, became European champion of juniors with the team and was third in the individual ranking as well as German Junior Champion.
There are also descendants of E.H. Cadeau’s in the United States. His son Tinto Retto, bred and owned by Holger Hoetzel, has already achieved success in dressage and eventing.

E.H. Cadeau passes on his type very evenly with very good size and caliber. In particular, the stallion passes on his very good interior and his high rideability as well as three very good gaits.