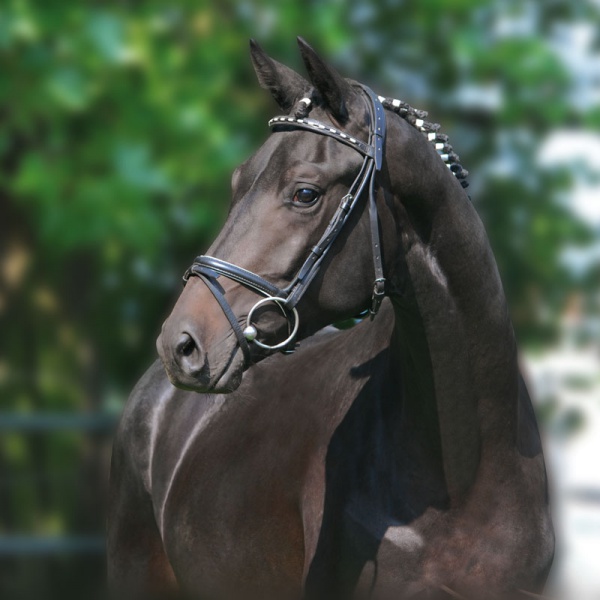 - The stallion is free from WFFS

Speedway was licensed at the Trakehner stallion market in 2016. He descends from Schwarzgold out of the state premium and premium mare Shahira by the elite stallion Anduc and had been bred by Udo Schmittberger from Schotten.

Lars Gehrmann, breeding manager of the Trakehner association, was generous with praise concerning Speedway’s evaluation. According to Gehrmann, the stallion by Schwarzgold is a “highly attractive type of stallion in a big line with lots of nobility and excellent posture“. The breeding manager especially emphasized that the stallion was “capable of immediately implementing this huge section of shoulder, saddle area and upper neck right from the acceleration of movement. He is equipped with maximum shoulder room and a powerfully transmitted canter.”

Accordingly, at 170.000 €, Speedway came to be the second most expensive horse of the stallion auction.

In September of 2017, Speedway passed his 14 days assessment test with flying colors. Under his rider Kim Pfeiffer he also became vice champion at the Trakehner federal tournament in Hanover and collected victories and places in riding horse tests.

Speedway also took part in the federal championships in Warendorf as the only Trakehner of his age.

In 2018, the typeful black continued to collect victories and placings as well. Under his rider Kim Pfeiffer the young stallion won class A dressage competitions, became Trakehner riding horse champion and was back at the federal championships. There, he was the only Trakehner among the four-year-old stallions. Thus, Speedway was the most successful Trakehner of his age in the sports year of 2018.

In early 2019, he passed his stallion sports performance test in Verden brilliantly as third best. Under his rider Kim Pfeiffer he got the overall grade of 7.88 and individual marks of 8.0 and better for the canter, the rideability and the overall impression – so that the elegant five-year-old dark bay has secured his entry in the stallion book I for life.

The 2019 tournament season also started well for the Hörstein stallion. With an 8.0, he won his first dressage test for young horses of class L. With two more wins at the Trakehner federal tournament, both in class L, Speedway underpinned his performance. He was the second best Trakehner of his age in the sports year of 2019.

His father Schwarzgold was a premium stallion of the licensing in 2011 and was also licensed for Oldenburg in the same year. In 2012, he qualified for the federal championships, successfully completed his 30 days performance test in Adelheidsdorf and became Trakehner champion of the four-year-old stallions. In addition, he was licensed in Denmark and Hanover. In the following years, the stallion was successful in dressage up to level M, qualified for the federal championships several times, and provided top foals for the auctions in Hanover as well as Perpignon Noir, the winner stallion of the Trakehner licensing in 2015, who was sold for a record price. At the Hanoverian mare show in Luhmühlen, Schwarzgold also provided the class winner of the two-year-old mares.

At the age of ten, Schwarzgold’s father Imperio had already achieved an extraordinary career. He had been the reserve winner of the licensing, Trakehner champion, vice world champion and federal champion. With his rider Hubertus Schmidt he showed his qualities with impressive performances at international tournaments. In 2016, the successful duo was the reserve pair at the Olympic Games and won the CDI4*-Grand-Prix in Aachen as well as nations’ cups with the team. By now, Imperio has been retired from Grand-Prix-sports.

The noble mother is a member of the reserve winner family of the State Exhibition in Hesse 2014. There, her own mother had achieved the class victory and had stepped up to the podium as a reserve winner. This branch of the widely spread Schwarze-Schwalbe-Family also includes Seal, who is successful on the Grand-Prix-stage, and Sergeant Pepper TSF, who is successful in dressage up to level S, as well as the sires Schwadroneur, Stradivari, Sanssouci, Showmaster, Saint Cyr and Songline (USA), winner of his licensing.

Due to his appearance, his personal contributions and his inheritance, the dam’s sire Anduc, an elite stallion, ranked among the most valuable stallions of the Trakehner breeding, even though he only reached the age of 14. He proved his outstanding rideability in dressage competitions up to level M and passed on his characteristics to his countless offspring. Best known nowadays might be Lutz Weyland’s Mon Acteur TSF, but Induc, Harlekin and Goldglanz as well as the stallions Schiffon, Le Duc and Angard have also been successful up to the highest dressage level. The offspring of Anduc, Helia, Esprit and Helena, cause a sensation in the driving sport, as well as Anduc’s grandchild Estephan. The jumping stallions Budweiser Classic and Balisto Z originate out of an Anduc-mother, as well as the eventing horses Karascada M and Karambeu M.

Anduc’s mother Angelique is descended from the family of Anemone (Igor Meyhöffer) and has Ibikus and Impuls in her pedigree, two of the most formative sires of the post war period. Repeated linebreeding on the big Humboldt has also caused attractiveness.

We were very happy about the first foal year in 2019.

Several winning foals of strong type were among the offspring. Speedway not only provided the best filly and colt in Hörstein, but also the reserve winner at the stud’s own foal show. Winners and reserve winners of the mares at the foal championship in Schleswig-Holstein also descend from the promising young stallion.

In 2020, the stallion shows just how typey and motivated he is to be inherited. At the foal championship in Rhineland-Palatinate he provided the champion and the reservechampion mares. So the championesse, a mare out of Ma Petit Fleur, descends from Speedway. She was bred by Karina Eckhoff-Engel from Riol. The reserve champion is a daughter of Speedway’s as well. The mare out of Hexe by Tarison also won at the Hörstein foal show. She was bred by the Layendecker family from Veitsroth.