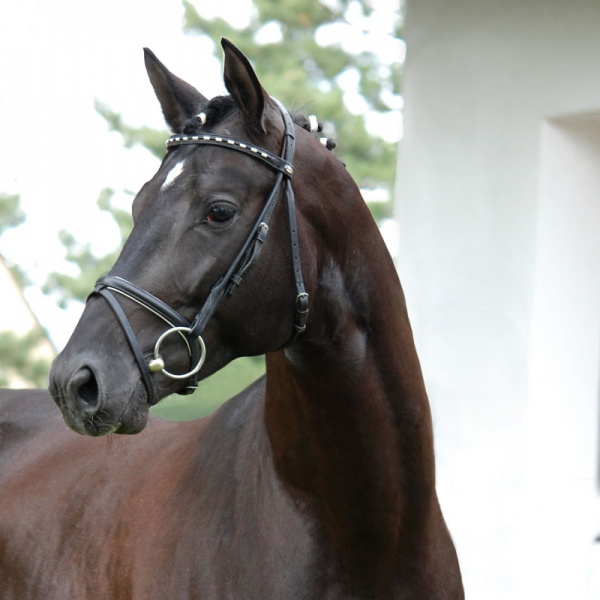 Tarison’s pedigree is very convincing regarding the sports aspect. His father Hirtentanz, approved for the Holstein Association and victorious in show jumping up to S level, and Axis TSF, victorious up to the highest levels of dressage, are well-known in Trakehner breeding and represent the current success of the dynasty of the elite stallions Sixtus – Habicht. Regarding sports aspects, Tarison is descended from a cleverly thought-out breeding with three S-level jumping stallions as he carries not only Hirtentanz but also Humanus and Caanitz on the maternal side of his pedigree. Both have been successfully taking part in jumping tournaments up to level S.

Caanitz’ dam is the state premium and premium mare Couleur by Kassiber. She was the impressive champion at the mare registration in Schleswig-Holstein and received excellent scores at the first Federal Mare Show for German Riding Horses, became third at the Mare Show in the Breeding District Rhineland, second at the Federal Trakehner Mare Show, second at the Federal Mare Show for German Riding Horses and the DLG Show in Frankfurt/Main. The dam Tiara VI herself was a successful show jumper up to intermediate level.

Traversale by Caanitz, a full sister of the granddam Tarabiscote, was also the dam of Troubadour (by Humanus) who was successful at S-level dressage. The jumper sire Titulus by Kasparow is descended from the same line of mares and was the best show jumper at his licensing.

Tarison successfully passed his 70-day-test. Particularly during the training, the son of Hirtentanz was able to convince the external judges and gained good scores. The dually predisposed stallion with strong nerves from the Hörstein stud enjoys great popularity with the breeders.

From his first foal crop in 2012 Tarison presented several auction foals for the national tournament and the stallion market. Tarison’s foals have since been characterized by him and are characterized by high sportiness. They have a sublime appearance, a clear uphill tendency and a lot of body with well-worn necks and large croup formations.

In recent years he has repeatedly presented premium, winning and auction foals.

With Trotha, Tarison already presented a stallion who was taking part in the licensing in 2016.

Meanwhile, eight daughters of Tarisons’ are registered in the studbook, including Gianduia, a reserve champion and best jumping mare, and Morrigan, the best of the four-year-olds and seniors in Rhineland. Both are now premium mares and successful in eventing.

In addition to the successful mares in the bush, another seventeen of his offspring are registered as sport horses. They are successful in dressage, jumping and eventing.
Several of his offspring scored points at the Trakehner national tournament 2019. For example, Aslan won two second places and Forrestine placed in a jumping competition. The two athletes had previously qualified for the Bundeschampionat.

Tarison’s first season offspring in 2012 brought along really great foals, on which he passed on his sportiness, his rideability and his excellent character. The stallion provided several auction foals for the national tournament and the stallion market. Among others, one filly from the breeding of Dr. Brigitte Westbrock (Worms) got selected as the winning foal of the Trakehner division at the foal championship Rheinland-Pfalz in Zweibrücken. This mare, Gianduia, was one of the first mares by Tarison who were presented for the stud book registration in 2015. In Zweibrücken, she became the best jumping mare and the reserve winner at only 0.5 points behind the winner. Now the premium mare is trained in the stables of Kai-Steffen Meyer. Under her rider she has already won and placed in eventing and has competed internationally in a CIC*.

The foal crops of the following years gave cause for joy as well. Amongst others, one filly out of Halinda became reserve winner at the foal registration in 2013. Three other foals of Tarison’s received awards. Tarison also presented outstanding foals in 2014. At the Hörstein foal show his offspring picked up second and third price. In 2015, a colt by Tarison out of Time at Time xx from the breeding of Martina Hölzel was the winner in Hörstein and qualified for the auction at the national tournament. In 2016 he presented three premier foals in Hörstein alone. A colt by Tarison out of Donauschwalbe from the breeding of Claudia Fröhlich (Darmstadt) was the reserve winner of Hörstein in 2017.

Therefore, it is no surprise that breeding manager Lars Gehrmann only has good things to say about Tarison’s offspring. “The dually predisposed stallion from the Hörstein stud has strong nerves and is very popular with the breeders. In many cases, his offspring are even more noble than expected. They have a sublime appearance, a clear uphill tendency and plenty of body with nicely carried necks as well as big shaped hindquarters. With a big frame, the foals mostly have a solid fundament. They are growing well and present themselves in all serenity with a sporty impact.

In 2015, the first mares of Tarison’s were shown at the registration and his producing qualities once again became obvious. Just like that, Gianduia got registered in Zweibrücken, Rheinland-Pfalz/Saar, with 55 points. With this score, she only missed by 0,5 points to make it to the first place and therefore got announced as the reserve winning mare. In addition, she has been awarded to be the best jumping mare. Gianduia is therefore the first award candidate by Tarison. By now she is successfully active in eventing in Belgium and has already won some tournaments.

Eleven daughters of Tarison’s have been registered in the studbook. Three of them have been awarded with a premium or even the state premium. One of them is the outstanding Gianduia. She is successful up to CCI**S. Another example is Morrigan, who became the winner of the four-year-olds and older in Rheinland. She has also been awarded with a premium and is successful in eventing.

In 2016 Tarison’s son Varos picked up third price at the Hörstein free jumping championships. His son Trotha was qualified for the approval of the stallion market. The half-breed got good assessments there. Lars Gehrmann described him as “a strong type with a harmonious appearance”. The breeding manager praised his presentation at free jumping and the “outstanding gallopade”. He said that Trotha was an insider tip for a future sports career in eventing. By now, the stallion is successful in jumping under the name Thibault.

Meanwhile, 17 offspring are registered as sport horses. In addition to Gianduia and Morrigan, who score in eventing, the four-year-old Aslan, bred by Manfred Junkert, proves himself in jumping and eventing competitions. He is victorious up to class L and was one of the most successful Trakehner eventing horses of his age in 2019. By his performance he qualified for the Federal Championships 2019. Forrestine also has a ticket for Warendorf. The mare by Tarison is very successful under her rider Florian Frisch and showed two nice rounds at the national championships.

Even six-year-old Philinah has already been successful with her breeder and owner Johanna Hüttich. She was victorious in jumping and cross-country competitions of class A ** in 2018. Rebecca Gerold and her Times Square are also making a name for themselves in cross-country.