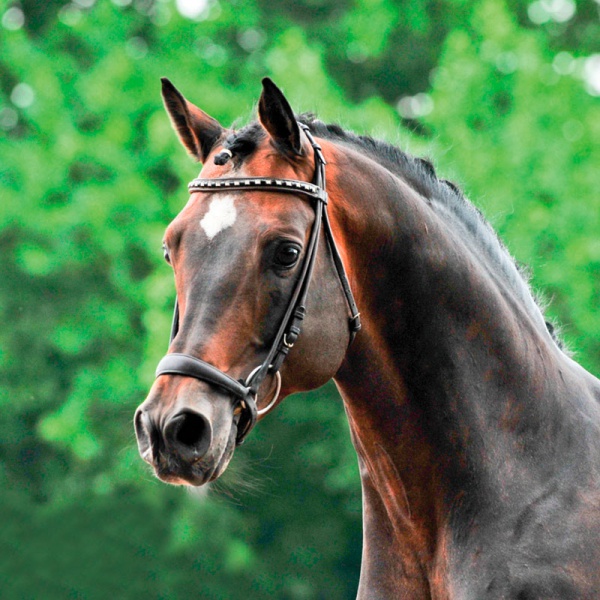 Stud fee: 500 EUR for the insemination and 300 € when pregnancy at the first october is proven,

Couracius has a first class performance pedigree: On his maternal line he carries the blood of the mare Couleur, who has been highly awarded multiple times. Among others, she also produced the sires Caanitz and Couleur-Fürst, both successful show jumpers, and the mare Contessa, who also placed in show jumping tests. In addition, one can find the genes of E.H. Caprimond, approved to transmit the best type traits, in Couracius’ bloodline. E.H. Caprimond himself was successful in dressage competitions up to Grand Prix level and carries the valueable blood of Flaneur.

Couracius’ father, E.H. Sixtus, has significantly shaped the Trakehner breeding as presently one of the best sires. He was highly successful in competitive sports and earned more than 50 placements and victories up to level S jumping. The descendants of E.H. Sixtus score in breeding and sports. In the paternal line, Couracius also carries the blood of Habicht, who was a formative sire in breeding and successful in Military up to level S.

Therefore, Couracius comes from the very best home and represents the noble Trakehner with a dry foundation in a classical style and an exemplary way.

He is a refining stallion, stunning in type and well set neck, with elegance and noblesse in every phase of his appearance.

Couracius has been the reserve winner of his stallion license age group in Neumünster. In 2004, he passed the 30-day-examination very well. He completed his stallion performance test in Neustadt/ Dosse with the highest ratings for character, temperament, motivation and physique (each with a score of 9,0). For his rideability he even scored a 9,25. Overall, Couracius ended up in third place of 48 stallions. In the dressage index (141 points) he moved to first place.

Couracius is the father of really nice, rideable and motivated sport horses as well as premium and state premium mares. Eleven of his daughters are registered broodmares. Four of them were reserve winners of their registration and were awarded the state premium. Among them was Shannon Queen, who is currently one of the most successful eventing horses of Austria and who reached ninth place in the World Championships of Young Eventing Horses.

Just as successful as Shannon Queen is Sans Soucis, who is native to Luxembourg. With his rider Lexi Fast he was able to improve over the last few years and has made it to level S in international dressage tests.

Couracius is the father of very good, rideable and motivated sport horses as well as premium and state premium mares. Eleven of his daughters are registered broodmares. Four of them became reserve winners of their registration and were awarded the state premium.

At the ZSE in Hohenahr (Hessen) in 2013 the mare Shannon Queen by Couracius out of Shannon Suite became the reserve winner with 55 points. In the meantime, the mare bred by the stud Hörstein with her owner Rebecca Gerold is victorious in eventing up to CIC** and is one of the best eventing horses in Austria. The mare also scored points at the World Championships for Young Eventing Horses. She came in ninth in 2016. At the 2018 World Championships for Young Riders, the couple also came in ninth and at the European Championships for Young Riders in Fontainebleau, France, a CCI2*, they were placed in the top third.
Also successful in the bush is Couracius’ daughter Lacoura, bred by Ilonka Danowski. She successfully passes in all-round tests in the USA.

And Cocolina Deluxe also attacks in the field. The mare collected placements and victories in class A* at the age of six. She was also a participant in the Trakehner selection days and particularly excelled there.

Sans Soucis FL is particularly popular in the square. The gelding out of the St.Pr.u.Pr.St. Shannon Shadow by Grand Prix is based in Luxembourg and placed internationally in the difficult class with his rider Lexi Frast.

Under his rider and owner Stefanie Oehlert, Sirius bred by Rudolf Ackermann successfully goes in dressage up to the M*-class.
Clondike has also proven himself in this class. The gelding bred by Julia Hansen is successful under his rider Tjorven Carina Keunecke.

The black-brown Simfony bred by Nicolas Kandel has won in dressage up to class L* at the age of six.
In class L, Nabucco Verde is also successful with his rider and owner Judith Dölle-Kohn.