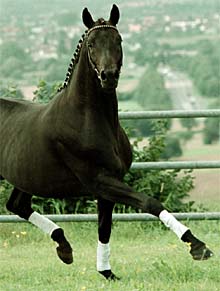 Regarding chic and charm, Lafayette is an instantly conspicuous stallion with a significant shoulder, excellent neck and a much-admired typiness.

Provided with a considerable frame and with strong and correct limbs, Lafayette boasts a motion sequence that is energetic and always maintaining the rhythm, with his walk being particularly superior. His dam, Limona II, provided the most expensive horse at the Neumünster auction in 1994, the mare Lana Luna.

The dam line is topical due to the national champion mare Lossainen, who stems from the same family.

In May 2008, Lafayette was sold to Russia where he stands at stud at New Century stud. Gestüt Hörstein continues to offer frozen semen.

Lafayette passes on his large frame, dark colours and his light-footed and energetic movements. His offspring successfully compete in dressage and eventing tests.

Provided His offspring include for example Ascara, winning mare of the 2003 mare performance test and winner of the “Nurmi Project” with a final score of 8.45, and Minzherz, who was the best four-year-old at the 2003 studbook registration in Hörstein.

Provided In 2007, Lafayette’s daughter Her Highness became reserve champion at the Central Mare Registration in Baden-Württemberg.